Fast and free shipping on all orders over € 49 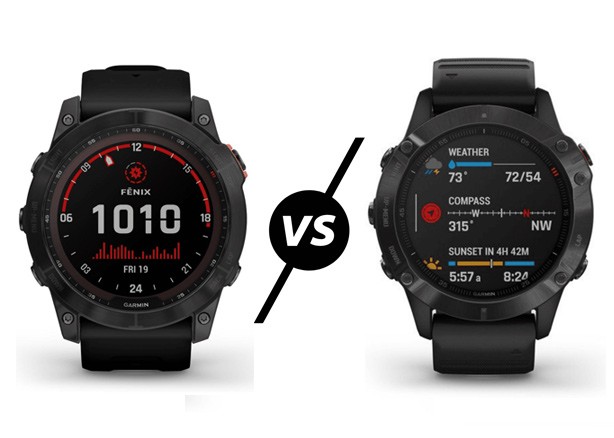 When the brand new Garmin Fenix ​​7 was launched on the market, a large number of running enthusiasts wondered if it is really worth investing their budget on this novelty, or if it is better to opt for the previous model, in the hope that the latter can be offered at a lower price.

There is no single answer to this question, since there are several factors that can make a difference. So much depends on the needs of the individual user. There are several people who need to always wear the top of the range available and others who, on the other hand, think more about saving money.

Why is it worth making the comparison between Garmin Fenix ​​7 against Fenix ​​6 Pro and not, instead, with the Fenix ​​6? The reason is quite easy to guess, since only the pro version has features that resemble the new model launched on the market.

What are the main innovations proposed on the Fenix ​​7

To understand what the differences are, it is important to highlight the innovations that arrived with the market launch of the Garmin Fenix ​​7. Among the most important and interesting innovations we find the touch screen, which manages to integrate perfectly with the use of traditional five frets. Depending on everyone's preferences, it can be a more or less useful solution, but it should be reiterated that, for more traditionalists, it is an option that can be easily deactivated.

From the point of view of improvements, it should be emphasized that GPS reception has been the subject of a large number of steps forward, even if it is an aspect that mostly affects those who love to train on off-road routes. The Solar Power is also present in a version of the Fenix ​​6 Pro, but the autonomy seems to be greater than in the latter model. Interesting, useful and practical, the choice to also integrate a multi-LED flashlight, which is a safety tool to get noticed, but also to attract attention in case you need help. Finally, the reliability of the heart rate sensor on the wrist, renewed for the occasion, is there for all to see.

Last, but certainly not in order of importance, we leave the Real-Time Stamina and Visual Race Predictor functions. In the first case, it is a tool that allows you to basically measure how your energy varies based on training and recovery, while in the second case it calculates, based on the data relating to training and competitions, forecasts on the times at which you can aspire, providing in turn information that can prove to be very interesting to organize your workouts even more effectively.

The “Pro” designation means that this range of watches includes typically premium features. For example, 32GB of storage space, maps for skiing or cycling, and so on. In reality, Fenix ​​7 does nothing but already understand all these features at a basic level. On the other hand, in this period some beautiful and interesting offers could be proposed for the Fenix ​​6 Pro models and, if you do not have particular needs, also in relation to the touchscreen, it could be a correct choice, given that the general experience is in many ways similar.

Chat with us on WhatsApp